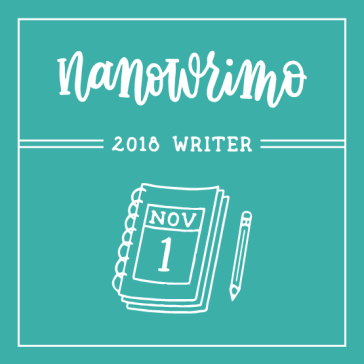 I feel like I rehash this little bit of history almost every year around this time. November 1st begins another NaNoWriMo, or National Novel Writing Month. The goal for Nano is to write a fifty thousand word novel in thirty days, or around seventeen hundred words a day. It’s no small feat. Many try, several succeed, more don’t quite reach the goal.

My first attempt was back in 2011. That was the year my life unraveled before me. In short, I lost my wife at the beginning of the year, started a new relationship shortly thereafter, only to watch that fall apart. As hurt as I was from my failed marriage, that second failed relationship seemed to defeat me. I was wounded, bereft of hope. I had nothing to occupy my time, so I dealt with not one, but two painful episodes at once. I did not handle it well.

On the first of November, as I was going through the motions, I logged on to my computer at work. I opened my browser and on the first page of Yahoo, I saw a weird looking word. Nanowrimo. Intrigued, wondering what it could possibly mean, I clicked on the link and found several articles to the yearly challenge.

I confess that I had long since wanted to write a book, I just didn’t know how. How do you write? I didn’t know. I had tried several times, getting paragraph or two in before throwing in the towel. Who was I kidding? I was no writer. I was some sad little freak with no talents, and that was that.

But that year was different. I had started blogging back in February of 2011 as a way to cope with my wife leaving me. It was a way to heal, to purge that hurt in a constructive manner. I wrote to survive, annd when my second relationship failed, it kept me from completely losing my way. It was my tether to life, but I was losing my grip, ready to give up and wallow in my pain, to drown in my misery. I was done with life.

Yet life was not ready to give up with me. Call it coincidence, call it divine intervention, it doesn’t matter, but what I saw was a glimmer of hope. Destiny had thrown my a lifesaver and I grabbed on for dear life. I bobbled helplessly for a while, but slowly I was brought back to shore. I was okay.

That first NaNoWriMo wasn’t easy. I didn’t know what to do, and I’ll admit that I had a very slow start. I didn’t think I could hit that 50K word mark. I was struggling to bang out a few hundred. But then I had a good day, writing over 5K words, then a few more good days. It was slow, but a story took shape. I wrote until I surpassed the goal, then I kept right on typing.

Every year since, I have participated and won. I keep on hoping that I will get to the point of actually publishing one of my works, and who knows, maybe I will but I don’t participate to become the next celebrated author. I participate because it gives me permission to write, and just write. There’s no time for second guessing. You write until you hit your goal for the day, and maybe a little more for good measure to offset bad days.

There’s a thrill in writing a book, of reading your own words, and marveling that you could be so cleaver. Maybe it’s not a great work, but maybe it could be. Several have turned their NanoNovels into published books, my favorite being The Night Circus.

In the end, I hope to have created something new. I hope that maybe this will be the story that launches my literary career. Novels, book signings, movie deals, the sky is the limit! Or it could remain a file on the hard drive of my dusty laptop. Only time will tell, and only if I commit to writing everyday this next month.

2 thoughts on “Another November, Another NaNoWriMo”